A few news tidbits from around the web this week with some updates of beers that should be coming to Eastern Iowa at some point. Have any news? Drop me a line @benmed15@yahoo.com:

**Boulevard Brewing Tropical Pale Ale – what started as a collaboration with Cigar City is now turning into a canned version solely released by Boulevard. Tropical Pale Ale will be released in cans. No word on if there will be a recipe change from the original and no release date yet. Stay tuned for more on this one.

**Lagunitas Waldo’s Special Ale – part of Lagunitas’ One-Hitter Series returns for a brief time and release date looks to be 4/20. This is a double IPA that in past checked in around 10.8% ABV and this year will be available in 12 oz bottles. Really excited for this one in bottles!

Anniversary coming out and another beer they’re releasing in celebration is a Keller Pils. This unfiltered German-style pils will come in at 5.1% ABV and be available in 12 oz cans and be released late spring/summer this year. 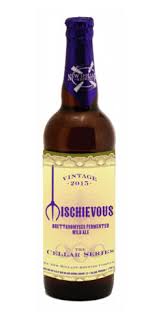 **New Holland Mischievous – part of New Holland’s Sour Series is Mischievous. This is an American Wild Ale that is fermented with brett. This beer checks in at 5.5% abv and will be available in 22 oz bottles. Here’s more from the brewery:

coming from Bells this April. At 4.3% ABV, this hop-forward pale ale is dry hopped with Mosaic, citra, and amarillo, amongst others and the using malted oats to give it that unique body. Here’s more from Bells:

COMSTOCK, Mich.—Bell’s Brewery will roll out a brand new beer in April. It is the first new addition to its year-round lineup since 2010.

A hop-forward session Pale Ale brewed with oats, Oatsmobile Ale (4.3% ABV) will be available on draught and in 12 oz. bottles, packaged in six-packs across Bell’s distribution footprint.

Oatsmobile is dry-hopped with a blend of classic and modern Pacific Northwest hops, including Mosaic, Citra and Amarillo, for a pungent blend of stone fruit and tropical aromas.

“This beer is unique. Aromatics may drive it, but the signature ingredient – oats – are what really makes this beer stand apart and also where the name comes from. It’s approachable and intriguing with a fun personality,” said Bell’s Vice President, Laura Bell.

“The use of malted oats help give it a body that you don’t see in most other session Pale Ales. Once we tweaked the recipe to combine the body from the oats with those powerful hop aromas, we thought it would make a great addition to our year-round portfolio,” she said.

This 100% all-malt Pale Ale was first brewed in 2013 to explore the use of oats in a Pale Ale at Bell’s original brewery in downtown Kalamazoo. Initially Oat Ale, it was renamed Boiling Pot Pale Ale when it was released as a limited specialty draught option in select markets.

Oatsmobile launch events and additional details will be shared at bellsbeer.com and on Bell’s social media as it becomes available.

Quite a few new brews will be hitting the shelves in the coming weeks and months. Along with the tremendous selection we already have a few more will be added to make your decision as to what to buy even more difficult. Here they come:

**Deschutes Brewing The Dissident: Starting to be available on Dec. 12 but I’m not sure if that is just brewery release. The actual date Eastern Iowa will see it I’m unsure of. It’s a flanders style sour brown that will be in 22 oz bottles with a 10.4% ABV. More from the brewery:

COMMERCIAL DESCRIPTION
Fermented for more than 18 months in isolation from the rest of the beers, The Dissident is a distinctive Oud Bruin, Flanders-style brown ale, with a fruity aroma and flavor, the first wild yeast beer made by the award-winning Deschutes Brewery.

To give The Dissident its characteristic sour taste the brewery used a wild yeast strain called Brettanomyces (also known as Brett) during fermentation. Known throughout the wine world for creating earthy undertones found in many European wines, Brett is used in the beer fermentation process to create strong flavors typically associated with Belgian beers. Unlike English varieties that use traditional inoculated yeasts in the fermentation process, beers made with Brett take much longer to ferment and require additional barrel finishing time to balance the sour flavoring. In the Dissident’s case, this meant aging a portion of it in pinot and cabernet barrels for over 3 months. Another key flavor component comes from the Central Washington cherries that were added twelve months ago.

Due to the wild yeast , The Dissident required special treatment and was held in isolation under lock and key apart from the rest of the brewery’s beers to avoid any cross-contamination. A secondary bottling line was also brought in from an outside contractor to facilitate The Dissident’s bottling and insure the beer and wild yeast never touched the brewery’s machinery. With a beer this wild and truly unique, Deschutes needed a special label to alert consumers to what lay inside. The resulting image immediately sets The Dissident apart from the other Deschutes Brewery beers, even the Reserve Series beers.

The fruit and acidity in The Dissident make it ideal for pairing with a wide variety of dishes – the high acidity is perfect for cutting creamy dishes or cooling spicy ones. Because of the fruity characteristics derived from the cherries, the beer also pairs well with chocolate. Deschutes Brewery President and Founder Gary Fish recommends pairing the Dissident with “anything chocolate, the darker the better, soft cheeses like Brie and creamy dishes like spaghetti carbonara, or macaroni and cheese.” 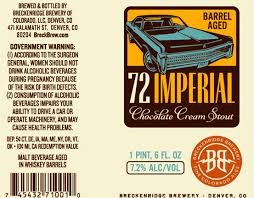 This unique release is a whiskey barrel-aged take on the brewery’s Small Batch 72 Imperial, an imperial chocolate cream stout. For every 100 bbl. batch, 400 lbs. of Rocky Mountain Chocolate Factory lustrous chocolate, made especially for 72 Imperial, are added to the brew. After spending a considerable amount of time in whiskey-soaked oak barrels, the finished product is molasses in color and smells of chocolate, wood, and whiskey harmoniously blended together. The beer has a dense and decadent mouthfeel and an abundance of rich flavors, including hints of sherry and dark fruit that compliment the toasted chocolate and oak notes remarkably.

New Holland Brewing has bottled the newest variation of their barreled beer – Dragon’s Milk. The imperial stout is aged in house bourbon barrels has undergone some raspberry treatment to create Dragon’s Milk Reserve with Raspberries.

Three breweries have/are entering the Eastern Iowa market in the next few weeks. Great Divide is here, New Holland Brewing is on their way, and Lagunitas has had a little trickle of their beers around but a big rollout is coming. Adding those three breweries along with all the others that are currently on our shelves, the wonderful dilemma of what to buy because there are so many choices is out there. Now, I know the talk of some oversaturation is out there and that is for a different blog post, but I would like to know what beer are you looking forward to the most from these breweries? We will be able to do the same thing once Surly, Southern Tier, and whoever else decide to enter the market. Would love to hear some comments as well!

The following comes from a New Holland press release and is courtesey of http://www.beerpulse.com. More beer coming our way, can’t wait!

(Holland, MI) – Holland, Michigan-based craft brewery and artisan distiller, New Holland Brewing Co. has announced plans to distribute their products to four new markets across the great plains and into the Rocky Mountains beginning mid-August. Colorado, Nebraska, Kansas and Iowa will soon be a part of the brewery’s now 24-state territory for beer and 17-state territory for spirits, including Washington D.C. To celebrate, New Holland will be hosting a handful of events in each state in August and September to kick off their launch in Central U.S.

“We are inspired by our mission to contribute flavorful choices to the passionate and thirsty craft drinkers,” stated Fred Bueltmann, VP of Brand and Lifestyle. “We feel connected to these markets for so many reasons, and have heard the call of demand for our beers and spirits. It’s clear there is a strong and growing craft scene, with passionate and dedicated people moving it forward”

New Holland has tapped several respected companies as their distributors for the new territories. CR Goodman in Colorado, Quality Brands of Omaha and Double Eagle in Lincoln, Nebraska, Worldwide Wine and Spirits in Kansas, and Glazer’s of Iowa. “It is amazing to see the remarkable level of service in the craft distribution game,” stated Bueltmann. “We have come a long way as an industry and we are impressed and excited to work with our new partners.”

“As Midwesterners, we have great affinity for the lifestyle of the Great Plains and the Rockies. We embrace the outdoors, craftsmanship and taking time to linger over flavors and conversation. We’re looking forward to sharing New Holland’s Stop and Taste way of life.”