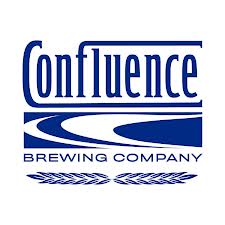 A lot of news on social media regarding some Iowa breweries and they all sound terrific! While roaming on twitter today I noticed a conversation with Confluence Brewing (www.confluencebrewing.com) announcing they will be brewing and releasing an IPA brewed with Mosaic hops! Not sure if this will make it out of the brewery to be sold elsewhere or not, but if it’s as good as their Des Moines IPA then we can expect a pretty delicious brew. Also, check out their new blog here: http://confluencebrewingblog.wordpress.com/ 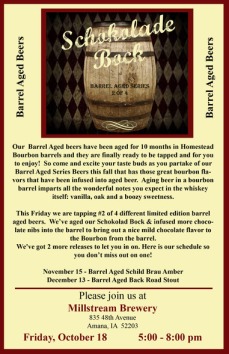 Next up, some exciting news from Millstream Brewing out of Amana. A barrel aging program sounds absolutely wonderful this time of year as nothing tastes better on a chilly Iowa evening than a barrel-aged brew. Three of their beers have been again in bourbon barrels and they will have special releases for each (see picture below). You will get barrel-aged versions of their Schokalade Bock, Shild Brau Amber, Back Road Stout.

Last but not least is an update from Peace Tree. They will be releasing 22 oz. bombers for the first time with their Templeton Red and their Imperial Stout! Can’t wait to get my hands on these, loved the red last time I had it!