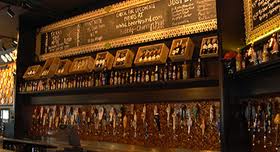 My wife and I recently returned from a trip to Kansas City, MO area where we stayed with some friends down there who I will refer to as Big Nuts and Moonbeam. While the trip wasn’t set out to be all about beer, but more of a nice, much-needed break, it turned out be a fantastic beer and food experience!

FRIDAY
When we arrived and Big Nuts and Moonbeam knew the perfect place to take us. The Flying Saucer is a place I’ve read about a few times in various beer magazines and websites and sounded like the perfect place for the weekend to begin….. and it did not 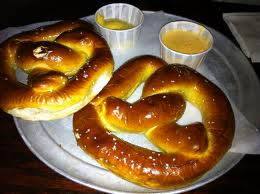 disappoint. We started the evening with a few appetizers; the Rocket Tots, which are tater tots with peppers in them served with a side of chipotle sour cream. Sounds basic, but it was awesome! Along with that we had two giant soft pretzels served with a cheese sauce on the side. These weren’t your everyday pretzels, giant, soft, and chewy, a fantastic companion to a nice cold beer. One thing that the Flying Saucer does well is rotate seasonals into their massive beer lineup. I was excited to see Southern Tier Pumpking on tap and started off with that. Great pairing with the pretzel and tots.
Main course: I actually ordered the “Hungry Farmer” which was essentially a charcuterie plate. I went with the peppered salami, prosciutto, and a cheddar with chives in it. This was served with crackers and a mini loaf of fresh-baked french bread. I paired this with Lagunitas IPA and I honestly think I reached a moment of zen! The peppered salami was something I would go back to again; my wife got the Sheboygan side by side; which is two beer brats with kraut and spicy mustard. Great stuff! Would really love to see a german-inspired menu hit the CR/IC spot sometime.

SATURDAY
Iowa football game day. Nervous early and the game didn’t help, Hawks didn’t seem to play that great but to help matters we ordered some BBQ from a local joint in Lee’s Summit. The Pork N Pit, according to Big Nuts, has been around for a couple of years and seems to have a good following. I ordered something a bit different from my usual pulled pork sandwich. I ordered, for the first time in my life, the burnt ends and the smoked beef sausage. Besides marrying my wife this is the greatest decision I’ve ever made! Burnt ends are so amazing, words cannot describe, and I won’t try..you just need to order them sometime. If you don’t like them at the place you order them, then the place is shit hole and you need to find another. The smoked beef sausage was also amazing; juicy, smokey, and the perfect amount of fattiness to go along with a Boulevard Bob’s 47 Octoberfest brew. Their fries are also great; perfect amount of salt, excellent stuff. And I have to mention the smokey baked beans; they add pulled pork into the mix…wonderful! So, drinking during the game and eating copious amounts of bbq would make you lay down and take a nap, nope!! Let’s head out for some wings and tacos…onto Stuey McBrews!!  http://www.stueymcbrews.com/ 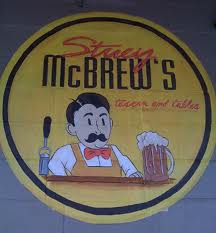 I will say, walking into the place it looks like a college bar/pool hall. The atmosphere is not something I would correlate with a place that has amazing food, but this was some of, if not the best bar food I’ve ever had. The menu is huge, with wings, tacos, sandwiches aplenty. It took me a while to decide what we wanted since the menu has over 30 different styles of winds, 20 some different tacos, it was overwhelming. We decided to get 10 of the Bar-a-cha-cha wings, which are hot thai honey and BBQ wings. Big Nuts and Moonbeam ordered the award-winning Adobe, and they get them charred and double dipped! Awesome stuff! We also had the Jalapenoroll, which was egg roll stuffed with cream cheese, sour cream, pepper jack, and parmesan, and some bacon and fresh ranch dipping sauce; tremendous! The beer selection was small but still had the local go-to which is Boulevard and I was very happy to see Deschutes Mirror Pond Pale Ale and Deschutes Black Butte Porter on tap. We also

decided to order “The Real McCoi Spicy Fish Tacos” which were a fish taco topped with asian slaw and asian vegetables. Think, stir fry mixed with a taco. Great stuff! Add a game of darts to the mix and it was the perfect evening!