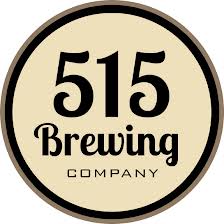 Thanks to Slim for the review. Sounds like 515 is has a very promising future in the craft brew business! Can’t wait to get out there to try some of their great beers.

I was fortunate enough to attend this fabulous event put on by the good folks at 515. I had done some research on them through their website (http://www.515brewing.com/index.html). It appears to be just a few former home brewers who decided to make their dream plan come to fruition.  I had heard from a friend who visited their taproom a couple of weeks ago that he highly approved of the entire operation. Solid brews and atmosphere. This got me even more excited to head down there and see what all the buzz was about. When I saw the baron’s post on their grand opening event, it was simply game, set, match, on finding the right time to check out 515 brewing.

I wasn’t really sure what to expect in terms of attendance before I arrived. They advertised that the first 50 through the door would receive a free 515 t-shirt. Although the freebie was enticing, my main motivation for getting there as it opened was to secure a table for me and my two accomplices during the event. For the purposes of anonymity, we’ll refer to them as “Terrible Terry” and “Iceman Jr.” There was a sizable amount of people in line as I pulled up so being that my free t-shirt hopes were dashed, I focused squarely on getting in line to try one of their tasty brews before they ran out. They clearly did a good job of advertising the event; in fact, by the look on some of the brewers’ faces, they probably did too good. I also was astonished by the turnout but it’s clearly a good thing. It’s another sign that craft brewing has made it here and will hopefully be here for a long time to stay.

I was also unsuccessful at securing a table and it did not appear they had very many set out; possibly to allow for more room for the high number of guests that they had anticipated. The taproom is about what you’d expect. It was spacious and had a home feel to it. It is bigger than most taprooms I have been to before and I think it will serve them well. I didn’t see a space for a patio, however. It is my guess that they are addressing this issue and will possibly have something set up for this summer. It would put the finishing touch on an already great venue. They did have a food vendor available on this day but the brewery itself does not serve food at this time.

Onto the beers! They had a full lineup on tap for this event. In the past, they have had a few of their offerings in addition to making some taps from Confluence Brewing available (http://confluencebrewing.com/). The first I tried was 515’s “Numb Nut”. It is a spicy brown ale that 515 describes as tasting like Christmas. I have mixed feelings on this brew. I did enjoy the creativity that was put into the making of this beer. However, I was turned off by the aroma, not the kind of taste I look for in a brown ale. Not for one moment am I trying to take anything away from what is a good beer, it just wasn’t for me.

The beer that went the fastest was the “OJ IPA”. The keg was dry in an hour.  Terrible Terry is partly known for his classic one-liners. He delivered one when he ordered this brew, “I’ll take an OJ Simpson IPA!” he said as he made his choice. It was the right choice, it’s wonderful wheat IPA that has a HUGE kick of orange/citrus. We immediately saw why it was so popular.  Iceman Jr. also tried the Numb Nut and I think he liked it more than I did. The two of us then tried “Belgian Paradise”. It was a Belgian-style white ale that also delivered more flavor than a typical brew of that style. Finally, Terry gave the Lil’ Tart (only beer available under 5.0% ABV) a try. The name is deceiving, there’s A LOT of Tart. I remember hearing him say that he didn’t like the Jalapeno beer offered by Bent River Brewing at the Brr fest back in January. So I wasn’t surprised that this was not a hit with him either. The tart in Lil’ Tart is very prominent and is definitely not for everyone.  The next time I attend, I’m looking to try the “Stout of the Closet” for sure.

515 lived up to my expectations and then some. Anybody who considers themselves craft brew enthusiasts needs to hit up this fine establishment. I recommend checking their facebook page/website before you visit in order to make sure they have several brews available. They keep this list updated and I would discourage going if they have less than 4 of their brews available. I’m sure you would still enjoy yourself but you’ll get the best experience if you go when they have a full line-up of their exceptional beers on tap.

My Tweets
Join 2,906 other followers