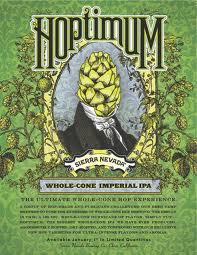 It seem I’ve been waiting on this beer to hit our shelves for a while now, and according to John’s Grocery’s facebook page, Sierra Nevada Hoptimum is currently in stock on their shelves. Along with Founder’s Devil Dancer, these two have made it a nice week of hops for Eastern Iowa hopheads. Enjoy the brew!

A group of hop-heads and publicans challenged our Beer Camp (#19) brewers to push the extremes of whole-cone hop brewing. The result is this: a 100 IBU, whole-cone hurricane of flavor. Simply put- Hoptimum: the biggest whole-cone IPA we have ever produced. Aggressively hopped, dry-hopped and torpedoed with our exclusive new hop varieties for ultra-intense flavors and aromas.

Hops, hops and more hops are the stars of this big, whole-cone Imperial IPA. Resinous ‘new-school’ and exclusive hop varieties carry the bold and aromatic nose. The flavor follows the aroma with layers of aggressive hoppiness, featuring notes of grapefruit rind, rose, lilac, cedar and tropical fruit – all culminating in a dry and lasting finish.