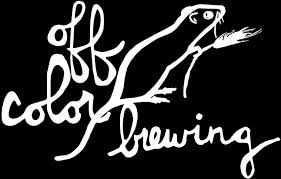 Some brews and breweries hitting shelves and tap lines this week have quite a few people excited. I was lucky enough to be at the Sanctuary in downtown Iowa City last Tuesday and got to try Off Color Brewings Dino’smores! An imperial stout that really gives you the marshmallow/graham cracker/chocolate that I was hoping to taste.  Really, really enjoyed it. It would be the perfect accompaniment to a nice fall evening! I know Off Color has Dino’smores on certain taplines (Reds Alehouse,Sanctuary) but I’m not sure who else has it. Scurry and Troublesome from Off Color are available as well but I can’t tell you exactly who has them, I would contact your liquor store. Here’s more on those 3 Off Color beers, if you see more from them or know who else has their bottles/taps, drop me a line. Thanks!

Off Color Scurry:
Ratebeer: 84/100
Beeradvocate: 84/100
Style: Altbier
From the brewery:
Honey beer with molasses and oats
Don’t let the color scare you. This surprisingly dry beer retains all the aroma and nuance of honey (from bees) and molasses (not from bees) creating the perception of sweetness through cool, controlled fermentation. Because we’re sweet enough dammit.

Off Color Troublesome:
Ratebeer: 87/100
Beeradvocate: 87/100
Style: Gose
From the brewery:
Most brewers spend a lot of time and effort keeping lactobacillus out of their breweries; it was the first thing we brought in (it still has to stay in the corner though). We blend together two different beers to make Troublesome. The first is a somewhat uninteresting wheat beer and the second is an overly acidic & funky beer fermented solely with lactobacillus. We blend the two beers together with coriander and salt at the tail end of fermentation to create a mild, lemony tartness and a fuller sensation of mouthfeel. And yes, it’s hard to make.

Also coming this week is Stone Russian Imperial Stout and Peace Tree No Coast. I haven’t had either of these beers yet so I’m really excited to give them a try. The Stone RIS and Peace Tree beers should be available for purchase tomorrow, not sure on when/if we will see them on tap. Here’s more on these two beers.

Stone Russian Imperial Stout:
Ratebeer: 100/100
Beeradvocate: 97/100
Style: Russian Imperial Stout
From the brewery:
“There’s no question that Stone Imperial Stout is revered among enthusiasts,” states Stone CEO Greg Koch. “I know, because I’m one of ’em and I can hardly wait for it to come out each year!” Some may think that a late Spring release for a special brew of this sort is an odd time for it to come out onto the market. Koch justifies this with the rationalization “What better than a warm time of year to come out with a brew that tastes great as it warms up!” That’s because “ice cold” is certainly not the appropriate way to serve the beer. Nearly without exception, the darker, richer and more alcoholic a brew is, the warmer the serving temperature should be. The Stone Imperial Stout label describes the brew as being “intensely aromatic (notes of anise, black currants, coffee, roastiness and alcohol) and heavy on the palate…expect this mysterious brew to pour like used motor oil and taste even heavier! Serve at 55 degrees.”