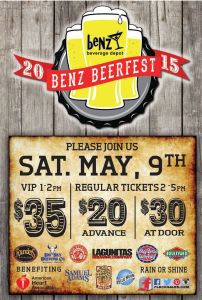 Matt Hanlin of Benz was kind enough to send the following information along in regards to Cedar Rapids Craft Beer Week starting May 2nd.

The week will culminate at the 11th Annual Benz Beerfest benefiting the American Heart Association. Over 50 breweries and distributors represented, pouring over 200 beers, Benz Beerfest has become the premier spring beer festival in Eastern Iowa.

Check the Cedar Rapids Craft Beer Week Facebook page for a list of events and plan on being part of this inaugural local event.