As the state of Iowa starts getting more breweries opening up and more breweries bringing their beer from outside states in, the competition for shelf space becomes harder and harder. Luckily, there are a bunch of Iowa breweries holding their own in the craft beer world, and one of those is Confluence Brewing Company (www.confluencebrewing.com). Located in Des Moines, Confluence is right in the middle of the ever-expanding craft beer movement with the likes of Exile, Raccoon River, Court Avenue, and 515. From the brewery:

As the capital of Iowa, Des Moines constantly surprises first-time visitors with its mix of expected agrarian heritage and influences and unanticipated cosmopolitan flare. So too, with Des Moines IPA, an American take on a world beer: India Pale Ale (IPA). Iowa’s steady, well balanced nature is reflected in this IPA with its mix of medium body, lighter color and plenty of malt flavor to balance the massive hop impact. Citrusy and piney hops from the Pacific Northwest offset the robust malt flavor of the two-row barley and medium crystal malts. Des Moines IPA proudly represents the Hawkeye State in the category of American IPA, a favorite of beer connoisseurs all across the country.

As I finished my shopping at the downtown Cedar Rapids farmer’s market, I decided to hit up Benz Beverage Depot to grab a few brews. As much as I would love to see Confluence come in six packs, I think the quart bottles kick ass. A unique, refreshing look that stands out on the shelves, and that is what sucked me in. 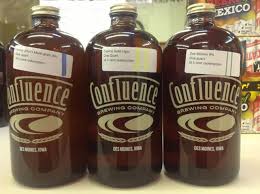 I’ve heard mention of their Des Moines IPA from people of twitter and facebook, so that’s what I decided my first Confluence beer would be. Upon returning back home, I sat on my deck, opened up the quart jug and shared with my brother-in-law. Not knowing what to expect, the first impression that I got was the tropical fruit aroma that made way into the wonderful bitter, pineapple taste. The quart didn’t last long, and we both were really impressed at the balance and drinkability this beer presented.

I haven’t had any other offerings from Confluence yet, but if their IPA is a sign of their other offerings, I think it’s safe to say that this brewery can be a major playing the craft beer game, I’m just trying to figure out a time to visit the brewery to see what else they have in store. Awesome beer as the Hawkeye state slowly continues to find its niche in the craft beer world! Find this beer and enjoy!

AROMA: Tropical fruit aroma is clear, as well as the hop presence.

TASTE: Pineapple shines and is rounded out nicely by the hops and malts.

My recommendation: Very impressive offering and happy that this is an Iowa brewed beer. Get out and buy a quart, support the state, and get yourself a fantastic beer!