I just received the following email from Tallgrass Brewing Company with some release informations. It looks like Zombie Monkey is returning soon at it’s going to join their year round portfolio. Here’s more info:

Zombie Monkie Returns, With a Twist…
The annual release of Zombie Monkie imminent! Sporting a fresh look with the same textured tactical grip, this robust porter will start hitting markets the next several weeks.
As the Zombie Monkie fanbase has continued to grow, it has become apparent that this combination of world-class beer and strong brand with a fun backstory carries greater potential than being a seasonal release. As a result, Zombie Monkie will become part of the Tallgrass year-round portfolio beginning this year. 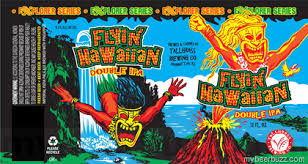 New Release: Flyin’ Hawaiian
Next up in the Explorer Series is the Flyin’ Hawaiian, an 8.4% double IPA with pineapple slated to ship to wholesalers August-October.
The Flyin’ Hawaiian is brewed with Nugget hops to provide earthy and pine notes, while the interplay of Pacific Gem and Falconer’s Flight hops creates notes of citrus, dark berries and tropical fruit.
A burst of fresh pineapple purée enhances the hops with an extra layer of tropical sweetness, and the simple malt bill of 2-Row, C40 and Cara-Pils allows the hops to shine and erupt with tropical citrus flavors.
Why the Flyin’ Hawaiian? The name was first used for one of our cellarmen’s cask beers. When our founder caught wind of the name, it was just too good to not slap on a can, and it had to be appropriated for our brewmaster’s new double IPA.
Available in 16 oz. 4-packs, 1/2 bbl and 1/6 bbl kegs, this brand also marks the transition of Explorer Series beers from 12 oz. 4-packs to 16 oz. 4-packs. All Explorer Series beers will be packaged in 16 oz. 4-packs moving forward.