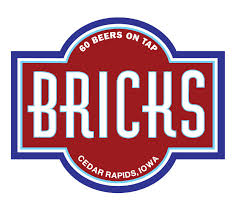 A fantastic opportunity to talk, learn, and taste all things beer is coming up from the folks at Bricks Bar and Grill in Cedar Rapids. Bricks University classes will be starting in January and will feature New Belgium Brewing Company. More classes will follow each month and the cost will be $25 per class. Here’s more info from Sam Tracy of Bricks:

We wanted to put together a program that allows people to be correctly educated about craft beer, so we’re bringing the best sources possible: the people brewing and selling the beer for featured breweries.  The goal is to have this be a laid back and fun thing that people of all levels of knowledge will be able to enjoy but also learn from.
The actual ‘classes’ include the following for $25:
– 30 minutes (or so) “lecture” that will cover some form of the brewing process or beer history (this is yet to be decided per class so far but will depend on each presenters strong suit).  Prior to this, everyone will be able to choose a pint out of the featured brewery’s core beers to sip on while they listen.
– 30 minutes (or so) “lab” that will include a pre-determined flight of four beers (there may be some fun surprises) that the rep or brewer will go through and talk about styles and expectations, how to enjoy, etc.
– The rest of the time is up basically for people to hang out, ask questions, enjoy the food provided, and just have a good time socializing in general.
The first class will be on January 23rd from 2-4 pm and will feature New Belgium.  The rest are not fully set in stone but we’re looking for the following months to be:
This is something we would like to continue doing on a fairly set schedule so in the future we will bring in different breweries.