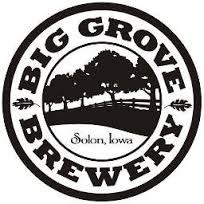 Big news from Big Grove as they continue their busy anniversary week by releasing a triple IPA and a pale ale. Both beers will be released this Friday (Sept. 2nd) at 11 a.m. This release with the Richards being released Sunday has the makings of a Big Grove weekend! Do they allow camping on their patio? Here’s the info!

This year our brewers decided to test their tolerance not only with the limits of the brew schedule but literally the alcohol level too. They set out to challenge one of the smallest brew systems in Iowa to make the biggest beer yet. At the end of 36 straight hours brewing 4 batches of beer, we present the first runnings, Plan A, and second runnings, Plan B. The project reflects the hard work and dynamic approach our brewers bring every day. Other than the power outage overnight from that monsoon of a storm, things went pretty smoothly. The first runnings, the heavy wort extracted from the mash before sparging the grain, was boiled separately before the rinsing the grain bed for the second runnings. Between the two beers over 1200 lbs. of malt was used and let’s just say we gave our local bees a lot of job security. Hops? Yes, bushels and bushels of hops.

The grains still had plenty to give producing a mild biscuity malt character in the body with a light oak hue. Wakatu, Columbus, and Cascade make this dry hop bright with zesty citrus aromatics. It still echoes some of its sibling’s fruit sweetness, but just a touch dryer on the finish.