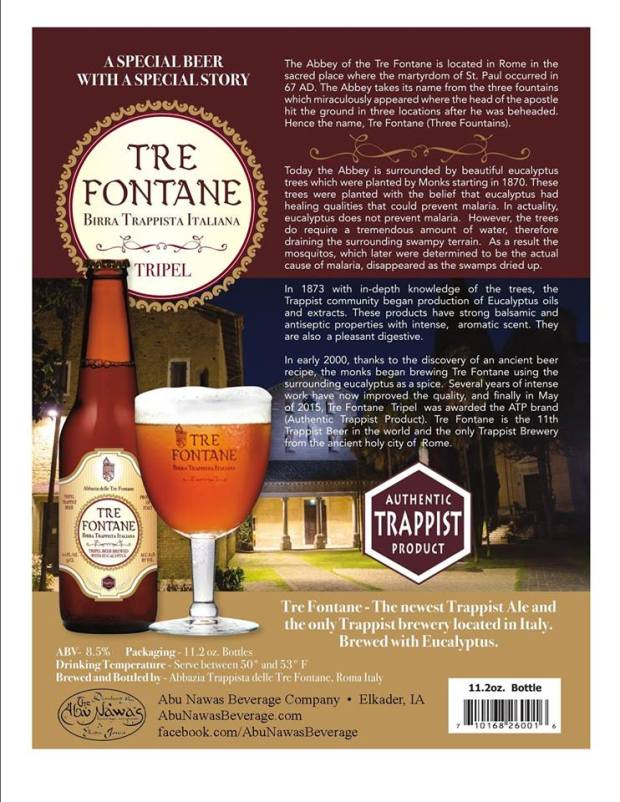 Big news coming again from Abu Nawas as they continue to supply our state with wonderful beers and they do it again! Tre Fontane, the 11th Trappist beer in the world from the only Trappist Brewery in Rome, will be gracing our shelves starting next week! Cheers to Frederique and Abu Nawas! Here’s the release on this awesome news!

We are we are humbled, honored and grateful to have been chosen to bring Iowa the latest Addition to the Authentic Trappist Beer Family. Tre Fontane Tripel The Abbey of the Tre Fontane is located in Rome in the sacred place where the martyrdom of St. Paul occurred in 67 AD.
The Abbey takes its name from the three fountains which miraculously appeared where the head of the apostle hit the ground in three locations after he was beheaded. Hence the name, Tre Fontane (Three Fountains). Today the Abbey is surrounded by beautiful eucalyptus trees which were planted by Monks starting in 1870. These trees were planted with the belief that eucalyptus had healing qualities that could prevent malaria. In actuality, eucalyptus does not prevent malaria. However, the trees do require a tremendous amount of water, therefore draining the surrounding swampy terrain. As a result the mosquitos, which later were determined to be the actual cause of malaria, disappeared as the swamps dried up. In 1873 with in-depth knowledge of the trees, the Trappist community began production of Eucalyptus oils and extracts.
These products have strong balsamic and antiseptic properties with intense, aromatic scent. They are also a pleasant digestive. In early 2000, thanks to the discovery of an ancient beer recipe, the monks began brewing Tre Fontane using the surrounding eucalyptus as a spice. Several years of intense work have now improved the quality, and finally, in May of 2015, Tre Fontane Tripel was awarded the ATP brand (Authentic Trappist Product). Tre Fontane is the 11th Trappist Beer in the world and the only Trappist Brewery from the ancient holy city of Rome.